2003 Fuel gauge will not go below half level

We’ve changed both fuel pumps with new and still having the same problem; any suggestions?

Does it go to full?
D

Goes to full; responds full range with ignition on/off. Only goes below half when ignition is off.

dicke2 said:
Goes to full; responds full range with ignition on/off. Only goes below half when ignition is off.
Click to expand...

Have you checked for any OBDII codes? Also, run seafoam through two tanks of gas.

I am having the same problem with my wife’s 2004, gage stays at half all the time even when we fill the tank. Replaced fuel pumps and the fuel gage worked as it should. Now it’s stuck at half again. Car runs fine but this problem just won’t go away.

dicke2 said:
We’ll give a try to all.

This may help. It describes how the fuel tank & its two pumps function.
The Fuel Tank & How It Works

The fuel tank is a dual-container (saddle type) which straddles the drive shaft of the vehicle. During fueling, the tank fills up the primary (fill side or passenger) side, then fuel spills across the saddle to fill the secondary side (driver’s side).
The Fuel Pump Module (FP module 9A309), within the fill side tank, filters and is the pump which provides fuel to the fuel system lines forward to the FG-1083 or FG-1011 (workshop manual) inline fuel filter (behind the Fwd Left Wheel splash shield), then to the fuel injector supply manifold. The FP module also supplies a small motive flow of fuel to the secondary side jet transfer pump (9A307) using the fuel transfer tube. As the vehicle is run, fuel is "jet pumped" from the secondary side of tank first via the connecting tube back to the FP module. When secondary side of tank is empty, the FP module draws fuel from the primary side of the tank.

The saddle fuel tanks are totalized by the PCM to register fuel quantity on the gauge. Both the electrical FP module and the mechanical jet pump have fuel level sending units, or, "floats". In the fill side, the Fuel Pump (FP) module contains the primary float that reads: half to empty. The secondary side float adds to the fuel totalizer to give: half to full tank. The PCM sums the readings from the primary and the secondary and sends that quantity to the gauge.

If the primary float had frozen in any level other than zero, the fuel registered would display the failed and frozen primary float level totalized with the secondary. As the secondary is used dry, and the display would continue to display this failed primary float position without change until the primary fuel is used to dry. The car would then be out of fuel, yet still displaying a fuel state, the "failed" primary fuel position. The thought here is, if you continually "top off" when you reach 1/2 on the gauge, this failure may be dormant for some time before it is noticed.


As a parameter within our OBD, I am typically running at a slightly oscillatory 55.2 psi fuel pressure with 33-55psi considered normal on page 310-00-1 of our work manual.

Just for grins, I ran tanks dry to "the light". According to the OBD, the fuel totalizer measured 12.8%. I interpret this as the remaining percentage of the 9 gallons within the primary side and this would approximate 23 miles to empty.

Since you have changed both the fuel delivery module and the jet pump module, before I would go any further I would check the resistance of both modules while they are installed in the fuel tank. If one of the modules are not in specifications that could indicate a defective module or the float is coming in contact and sticking inside the fuel tank. 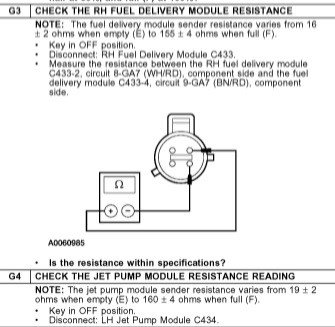 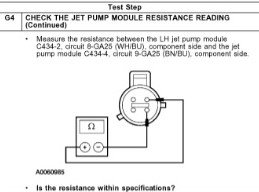 Replaced fuel pump car runs fine but gas gauge only reads from full to half a tank. Tank is empty at a half indication. Got any easy solutions before pulling fuel pump again?